The main clue alluded by Zodiac on the cover of the Halloween card which should lead to his real name is the letter Q[1].
Zodiac could speak Italian and read comic books. His signature may be “by water” and contain the word “water” in Italian, ACQUA. If this is true, the most probable Zodiac’s last name would currently be BEVILACQUA.

How the riddle has been solved
The main solution to the Zodiac’s Halloween riddle is reached through assonance between the letter Q and the syllables of the word CUCÙ derived from “The cuckoo’s game”, Il gioco del cucù, the Italian version of Peek-A-boo. CUCÙ has the same pronunciation of QQ in Italian and is the correct translation of BOO from English to Italian in this case.

Context
The 13 symbols row composed by Zodiac in his letter postmarked April 20, 1970, hadn’t been yet deciphered when, six months later, the mass murder sent a Halloween card to San Francisco Chronicle reporter Paul Avery that reads: «I feel it in my bones, you ache to know my name, and so I’ll clue in…» (FBI specimens on the Halloween card – source).

Riddle
The main questions based solely on what Zodiac wrote in the card are:

Western comics
The way to go to find the answer to question 4 has already been discovered by Tahoe27 here. The four sentences with “by” on the back of the Halloween card appeared to have been copied from a “Death Wheel” depicted on the cover of Tim Holt No. 30, which was entitled «Lady Doom and the Death Wheel» (here’s the comic book). Zodiac copied all the deaths from the cover[2] except one, partially hidden by Redmask’s head, «by water».

Two confirmations of Tahoe27’s discovery can be found on pages 2 and 3:

Question 4 should be replaced with:

4. Why did Zodiac transcribe the deaths on the cover of Tim Holt #30 to his Halloween card, apart from “by water”?

VF Symbol
A few “Zodiologists” are convinced the VF symbol drawn by the mass murder on the envelope and on page 3 of the card is a cattle brand “owned” by another Western hero of comics, Red Ryder. This clue is mentioned by Robert Graysmith in “Zodiac Unmasked” on page 128 (link). The cattle brand (without dots) was depicted on the cover of Red Ryder #15[3].

The difference between Zodiac’s symbol and the cattle brand could have be caused by the inclination of the brand on the bull.

Braille
The four dots in the cattle brand translate the letters “I” and “E” in Braille[4] (source: Braille Authority). «Ie», the acronym of the Latin words “id est”, is used as a synonym for “in other words”, “that is” (source: Wiktionary).
Zodiac emphasized the number 14 in his postcard focused on an “eyes” theme. The alphabet for blind people seems to be the right reference because the Red Ryder comic book #14 story was centered on the main character’s temporary blindness (here’s the whole story).

Reversed P
The Braille characters should be touched with fingers to be read (source). If you hold in your hand the Halloween card, putting your forefinger on the dots and thumb on the other side, or vice versa, your finger on the back will point to the area in which the P of ROPE is.

Aberrations
Zodiac pointed out the line where is the flipped N of «By knife» (an aberration) writing this «By» vertically instead of horizontally like the other ones (another aberration). The flipped N is in the same horizontal row where P is.
If you reverse the P, as you should reverse the N, you’ll have a q.
The meaning of this part of the riddle is «ie q» which means «In other words, Q».

The Halloween card aligned for printing is at the following links:
Front and back
Inside pages

The exact position of the four dots in the VF symbol could also be checked at the following link:
Pages 3 and 4 together (with the FBI’s copy too) 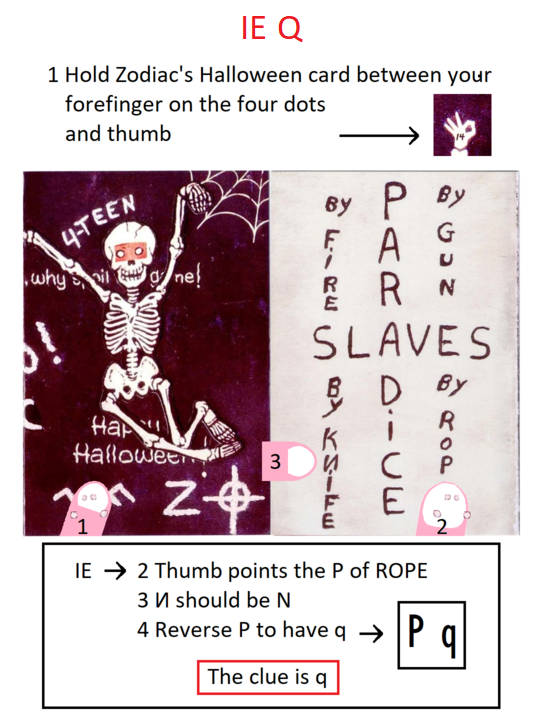 The cuckoo’s game
«But then, why spoil the game!» Zodiac wrote on pages 2 and 3. The answer to this riddle is just Peek-A-Boo, a universal child game known by different names[5].
In Italy, Peek-A-Boo is called “The cuckoo’s game”, “Il gioco del cucù” (here’s the related page on Wikipedia). The Italian pronunciation of “cu” is the same as “Q” (source: Collins Dictionary, image). The big “Boo!” in the Zodiac’s Halloween card should be translated “Cucù!” which has the same sound as “Q-Q” in Italian. This could explain why Zodiac twisted around an eye the Q-shaped sentence «Peek-A-boo you are doomed», drawing an A like it was a beak.

Solution
The clue given to the reader by Zodiac to reach his name is the letter Q. This could mean that Q is one of the 13 symbols he had encrypted in the “My name is – cipher”.
This solution turns out the killer possibly spoke Italian, which could be also the reason why he underlined “LAV” on the envelope. 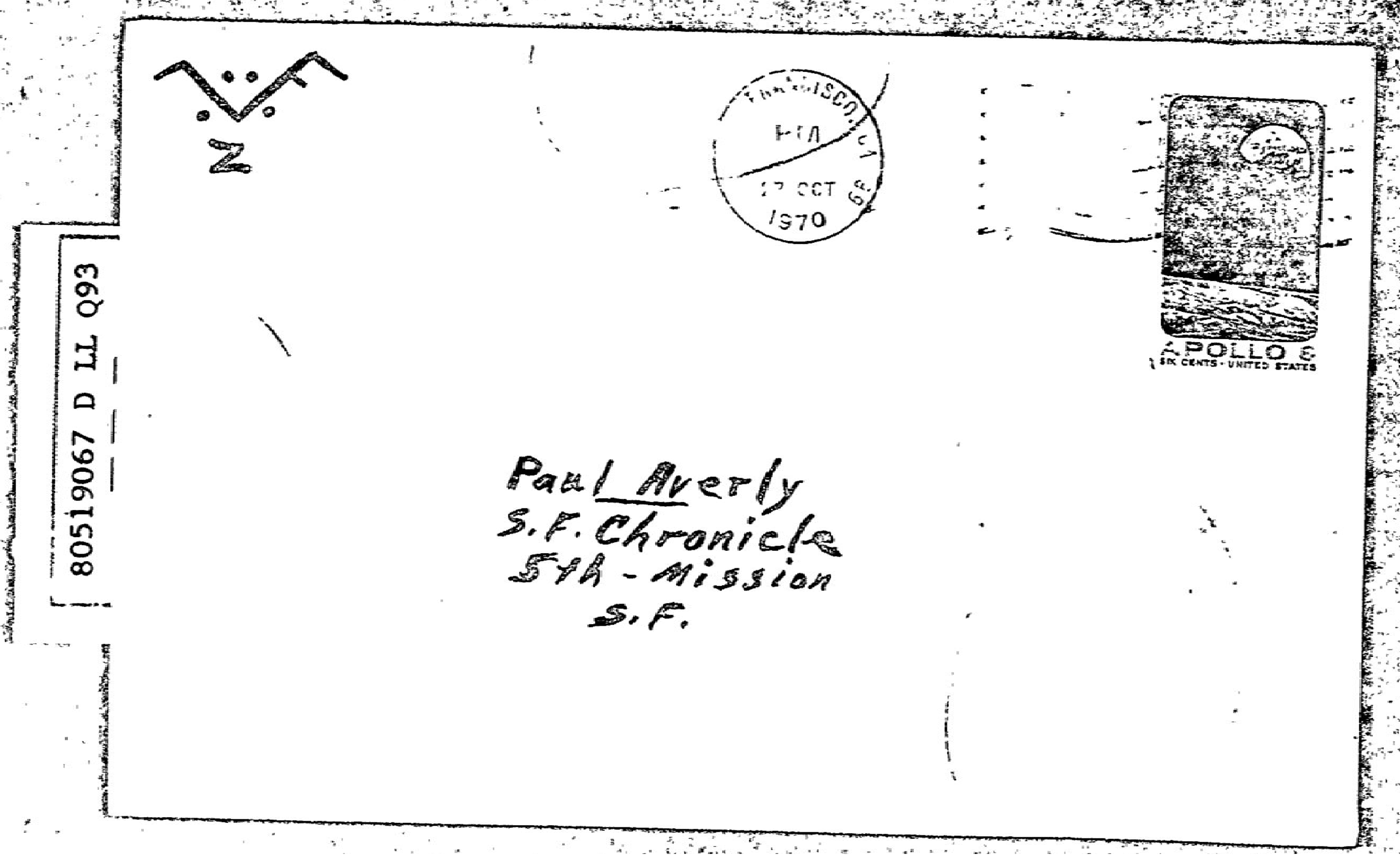 Wash – Lav…
In the Collins Italian College Dictionary 1991, the Italian words starting with “lav” are mainly associated with the verb “to wash” (lavare) and its compounds: 19 on 27 Italian words that begin with “LAV” are derived from “lavare” and 13 of them contain the word “wash” in English (image). The same word, “wash”, is alluded to or mentioned by Zodiac a few times in autumn 1969.

What could “wash” mean for the killer?

By water
A very reoccurring element in Zodiac’s crimes is water, Robert Graysmith has written in his books a few times since 1986 (an excerpt from his first one, “Zodiac”). The only death the killer did not copy and paste from the cover of Tim Holt #30, as others have noticed (thread), is just: “By water” (it’s one of the deaths to which Redmask is condemned – you can read it here on page 8 of the comic).
The answer to question 4 is that Zodiac copied the four deaths in the wheel on the cover of the comic because he wanted to allude to the only one he left out, «by water», that is a possible signature.
Zodiac’s last official signature (the only one explicit) is indeed a “death by water” taken from “The Mikado” by William S. Gilbert and Arthur Sullivan (the letter’s here – FBI Laboratory, specimen Qc63).

Acqua
Zodiac could be an Italian American and his last name may contain not only a Q but «acqua», the Italian word for “water”.
The most popular last name with the word “acqua” in 13 on 20 Italian Region capitals (estimate) is “Bevilacqua”, drink-the-water (source and first results for each Region). Bevilacqua is also the most common last name with the word “acqua” in the USA (source: 2010 US census – the list is in the file B at the bottom of the linked page) with 2667 occurrences, followed by Passalacqua (1410), Bevacqua (928) and Acquaviva (837). About half of them should be female and not all males were already adults in 1969.

A cheater
Red Ryder comics in Italian were published by Edizioni Mondiali, Albi Urrà!, in 1947 (link). Below, the cover of issue 9 featuring the casino’s owner Joe Hayes, who appeared in newspapers in the USA for the first time in 1944 (comparison of the first strips). The title translates: «Joe the cheater».

[1] I had already posted on Reddit a few parts of this solution two years ago.

[2] The Death Wheel in the inside pages of Tim Holt No. 30 mentioned also other deaths, but Zodiac copied just the ones that were also on the cover (a part from “by water”).

[3] The VF symbol might have been a composition of the Phoenician letters Giml and Yod (backward) taken from Phoenician Alphabet or represents another cattle brands. However, these variables appear to be less probable than a reference also coherent with the choice to quote another western comic book, Tim Holt No. 30. Lastly, I did not find any plausible meaning in these possible alternatives.

[5] Private detective William V. Pennington’s “Peek-a-boo” advertisements might have been a possible inspiration for the composition of the Halloween card (references). Pennington was tagged “peek-a-boo” because of his job as a private “eye”. In the 40s, he had an office at 210 Post Street in San Francisco, close to the point where Zodiac possibly hailed the taxi driven by Paul Stine at Mason and Geary streets. However, Pennington was not still a detective in San Francisco since the early 60s (here’s an article from the San Francisco Examiner, April 28, 1966). This possible reference is not in contradiction with the solution, but it might be just a resemblance or plagiarism.