Zodiac and the Monster of Florence. Facts vs inaccuracies and lies

An answer to the pretentious hogwash of the “debunking theory” on Joe Bevilacqua follows. About it, I especially note that the author at the linked article has never used quotation marks or provide a linked reference for the main object of his examination, which would have been my newspaper articles and my long-standing journalistic inquiry.

It’s easy to understand that Bosco is not a fact checker from the very first lines of his article (read above). Where is the link to my inquiry? There is not. Instead, there is the reference to what Bosco wants to show to readers, that is Joe’s recantation, presented as «actually true». There are also these facts “actually true”:

2. “THE ONLY RELIABLE INFORMATION”

“The journalist claims several times…”
No quotation marks, no links to my work. The whole article has been built this way.
Could Bosco be considered “reliable”?
His “reliable” source, La Nazione, was in the newsstands on 27 January  1984 with posters claiming «the Monsters are two, arrested» (picture below). The real murderer killed 4 persons at least after that proclamation. How dare Bosco says the newspaper that was not aware of almost anything of Joe’s story provided «the only reliable information» in this matter?
Besides, the article on “the journalist” that the debunker has cited did not mention other than two single words heard from the “Florence Prosecutor’s office” (here’s the whole article with the two quoted words circled in red). The truth is that “the journalist” was interviewed as a witness by the Florence Prosecutor’s Office few days after, on June 19, 2018.

I have just never written that «the Vallejo Police Department is working on the case». Indeed, there are no links to prove it.

Several times the author speaks without knowledge using caps lock instead of providing evidence for his assertions. The sentence “Ulisse IS NOT J.B.” shows that he says things without knowledge.
Ulysses, an American man accused by postman Mario Vanni to be the real serial killer, has never been individuated. The presumptive identification of Ulysses in Mario Robert Parker, an African-American guest of a villa near a crime scene who would have been nicknamed Ulysses, according to a witness in the “Companions of snaks” trial, is actually doubtful and uncertain. However, it would have been enough to read my articles to know that I used the name of Parker to reassure Joe. The truth is that nobody knew for sure who the American serial killer mentioned by Mario Vanni in a 2003 conversation was. It is known, however, that Joe Bevilacqua is the only American who appeared in the Monster investigation and met Pacciani near a wood, like Ulysses would have done (“Pacciani was in the wood” by Franca Selvatici, La Repubblica, 7 June 1994).

Does “nero”, black, just mean African-American, as Vanni seemed to think? Or maybe “black” could mean something else that Vanni equivocated while he was told about the American monster? “Nero” could also mean “water” in greek, or “fascist”, “black-masked” etc.

The water theory, first mentioned by Robert Graysmith in “Zodiac” (1986), regards the fact that the Zodiac killer made many references to this element. A list of them follows.

It has been recently discovered (here’s the news) that also the Monster of Florence did the same in his only “official” letter which was postmarked September 9, 1985.

17. The title of the main article the Monster cut for his message contains the only whole word (“Della”) the mass murder pasted on the envelope. It reads: «Dear sweet waters, I do not know you anymore: my childhood dream is ended here». From here, the murderer cut other two letters: the E of acque, waters, and Z. 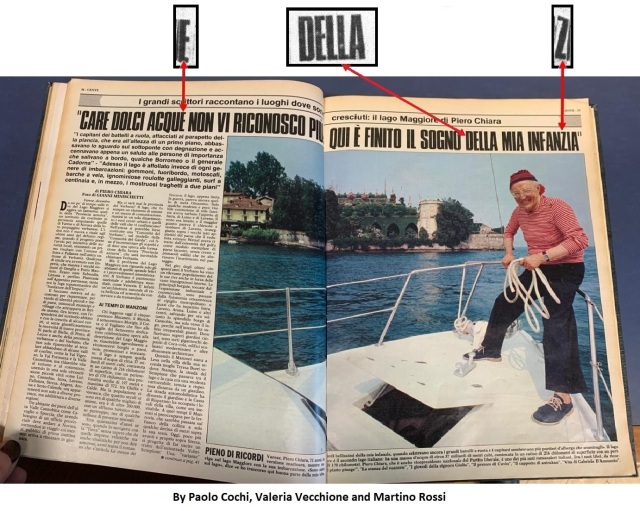 Monster
6. The “Italian” serial killer cut the punctuation from an advertisement for a washing machine brand as below.

To compose his letter to Della Monica, the Monster used a magazine in newsstands between December 14 and 20, 1984

On December 29, 1969, the office of the FBI in San Francisco sent a list of suspects’ names (this one) provided by the police to the Identification Division for a checking related to Zodiac.
In their response dated 12 January 1970 (here), the experts of the Identification Division pointed out the suspects in the list had «same or similar birth dates» .
Probably after the response of the FBI laboratory, noting the experts’ observation, the agents in San Francisco asked the SFPD an explanation to the suspects’ birth dates. On January 14, they reported (here) to the Director and Identification Division that the SFPD told them a self proclaimed Zodiac had called attorney’s Melvin Belli’s home saying it was his birthday. They did not specify when the phone call had been made.

The “birthday call” reported by the FBI

“TODAY’S MY BIRTHDAY”
“I can’t wait. Today’s my birthday”, the self-proclaimed Zodiac said to Belli’s housekeeper, Erna, who told the caller that the attorney was in Europe.
In the same time period, on 20th December 1969, the real serial killer mailed a letter to Belli to the same address asking for haste towards him using an analogous expression: “I cannot remain in control for much longer”. Exactly one year before, he had killed a couple of teenagers on Lake Herman Road, Vallejo.
Joe Bevilacqua’s birthday is on 20th December, which also is the last day of staying in the newsstands of the issue of the magazine used by the Monster of Florence to compose his letter to Della Monica, in 1985.

«Fingerprints were located for the remaining twelve individuals with same or similar birth dates», is reported in the response to a request on 29 December 1969

AT THE END OF DECEMBER
According to the San Francisco Chronicle, Belli was in Europe when Zodiac’s letter postmarked December 20 was mailed. The envelope was not opened before Christmas and the news was not disclosed before December 27 (here’s the first mention in the press), which almost completely excludes that the call had been made by someone who, other than Zodiac, was aware of his message to Belli.
This supports the hypothesis that the call was made by the real serial killer.

Note
The date of birth of the mythomaniac who had called Belli on television in October 1969 and was traced after another phone call to the KGO-TV (FBI communication) did not fall within December, according to this source.
December 20 would be the most probable date of the “birthday call” if Zodiac was the man who phoned at Belli’s home. For verifying this deduction, the police may easily check the date of births in the 29 December list. 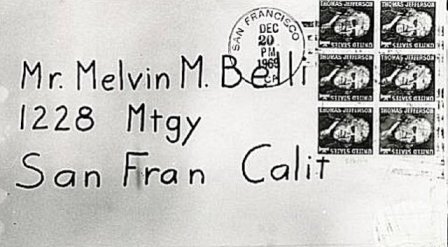 Zodiac probably did not write the Red Phantom letter according to the FBI laboratory experts who examined it in 1974, stating that the postmark on the envelope was illegible (reference). The date “July 8” was just a supposition of the San Francisco Chronicle based on the fact that it was received on July 9. This is not great proof because the previous two letters were received respectively 11 (reference) and 25 days after be mailed.

Joe’s real name is Giuseppe, according to the Italian Registry Office. It might be his baptismal name, a variant of the American Joseph which appears on his American documents.

I never said that Joe fought «in the Cambodian campaign» and he did not.

I did not claim that Joe was in Vietnam with the 5th CI Detachment. He just worked for the Army Criminal Investigation Division which was composed of several detachments, not only the 5Th.

That wore by Joe in this picture is not a «navy uniform» but a uniform of the American Battle Monuments Commission for which he worked from 1974 to 2010. Here’s on the left another superintendent in similar clothes.

Joe saw the last official victims of the Monster a few hours before they were killed near Florence between September 6 – 8, 1985. On June 6, 1994, he told the court at Pacciani’s trial that he saw the girl wearing a swimsuit. She was not on a beach but about 80 km away from the sea. However, swimsuit among her personal effects had been found by the police after the murder. Joe’s big error was saying that he knew about the crime before it was found out by the police (here’s the translation of his whole testimony). That could just be a murderer’s mistake.
I think now that Joe gave the name “Raggianti” (radiant) to Vigilanti to allude the solution of his name cipher based on the song “Aquarius-Let the sunshine in” by the Fifth Dimension.
Why should he have known that Vanni was dead? 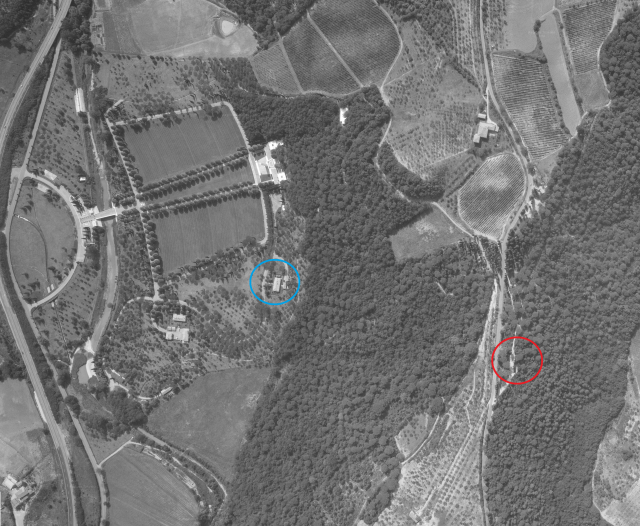 Aerial photo of the Florence American Cemetery – 1982. In blue, Joe’s house at the time. In red, the crime location of the 1985 Monster’s murders. The distance as the crow flies between the two locations is about 300 meters. The difference in height is 100 meters. You can see the dirty road just ahead of the pitch, on the left, which goes down to the valley along the cemetery

Pacciani probably did not recognize Ulysses at the trial. Perhaps “nero” means that Joe wore a black hood, as Zodiac did in his attack at Lake Berryessa about 15 years before. Even if Pacciani had recognized Joe at the trial, he probably would rather blackmail him to get himself off the hook instead of making a complaint.

14. I furnished the solution to Zodiac’s Halloween riddle, the decryption of the Mt. Diablo and Zodiac’s name ciphers, for example.

Joe said that the best way to hide a corpse in the Lake Tahoe area was to launch it from a helicopter on the peak of the mountains near the lake, because it would be almost impossible to be found. It was just what he would have done if he had been the killer and had a helicopter.
According to Joe, another good place to hide a corpse would be Emerald Bay, if it weren’t for the presence of campsites and rangers.
Except for Zodiac, obsessed with his “paradise”, I do not know how many people a part from Joe would have said laughing that, thinking about it, the best choice to hide a corpse was represented by «Heavenly Valley because it means “paradise”»

14. A BIG MISTERY WITH A SCIENTIFIC SOLUTION

Here’s the answer. Here are some examples of how Joe could reach San Francisco from Saigon in December 1968.

The sources behind the fact that Joe was accused of having admitted to being the Monster and Zodiac are at least three: the Carabinieri of Lecco and Monza, Judiciary Police, and Florence Prosecutor’s Office. Also, the U.S. Department of Justice has been informed.
Most of the other Bosco’s assertions on me are just considerations based on false things in order to discredit me and matter of a complaint against him for defamation (see here).

Una risposta a Zodiac and the Monster of Florence. Facts vs inaccuracies and lies