This is the correction of the solution to the Mt. Diablo cipher which was published here, in 2018. That version had the word “miles” instead of “mi far”. It was delivered to the Italian authority on 19 March 2019 (report in Italian).
I put the following decryption on Reddit about two months ago. It actually works with “mi”, the abbreviation of “miles”, and “far” (instead of “away”). Zodiac enhanced his encryption adding a full turn to the degrees of the angle that leads to the location of the bomb.

Map and cipher together

Zodiac wrote “the map coupled with this code will tell you where the bomb is set” (Zodiac’s letter of June 26, 1970, and map), implying the cipher and indication on the map were complementary and the solution was based on both. One month later, Zodiac suggested the code was related to inches and radians (post scriptum, “Mikado letter”), which could mean he had enciphered an angle and a distance. The FBI analysts in 1970 supposed the presence of the word “miles” in the text (FBI Vault – Zodiac, part 5, pp. 167 – 168; FBI laboratory worksheet on the Z32).

The true north is at an angle of two degrees farther east compared to the vertical axis of the map, according to the compass on Mt. Diablo (you can check it here). Set Zodiac’s indicator to the magnetic north of 1970 in the San Francisco Bay Area, 17° east of north (Historical Magnetic Declination, NOAA; the reference). Please, spin it clockwise 570° (a full circle plus 210°). Unite the four line segment of the quadrants along the direction of the indicator with the help of a ruler. The arrow will point to the target zone.

Location of the bomb

The bomb was set on Foothill Blvd at Hillcrest, in San Leandro, about 16 miles away (“far”) from the Mt. Diablo peak, apparently in the surrounding area of the Eden Township Substation – Alameda County Sheriff’s Office.

In February 1970, 12 Alameda County deputy Sheriffs were charged for having violated civil rights law (here’s the source; The Napa Register, February 3 and March 24, 1970).

The Mt. Diablo cipher is composed of 29 different symbols for 32 characters. Two substitutions for E and S occur also in Zodiac’s 408 cipher. 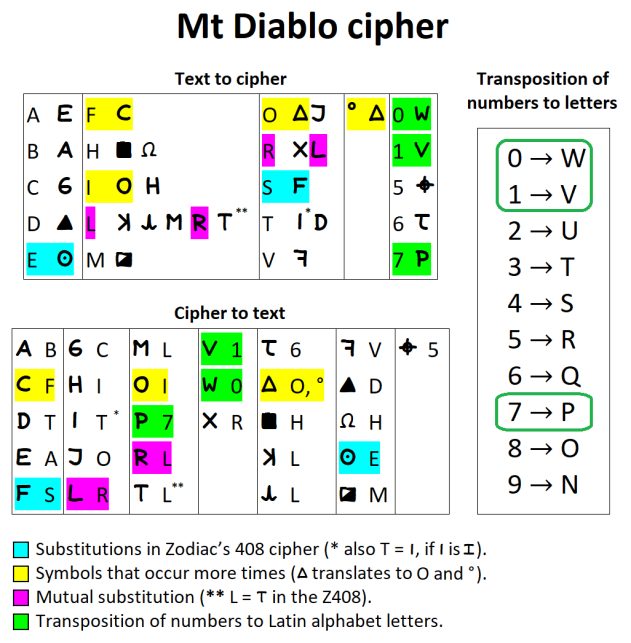